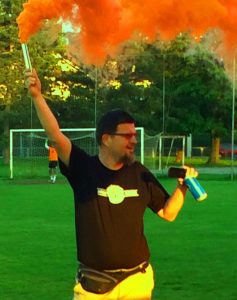 This Croatian ethnographic case study followed the politics and movement of the ‘Supporters’ Varteks FC’ based in the city of Varaždin in the north of the country.  The study was carried out by the research team Benjamin Perasović and Marko Mustapić from the Institute of Social Sciences Ivo Pilar. The authors previously participated in the large international research project EU FP7 ‘Myplace’ where they conducted research on the oldest football supporters ultras group in Europe – the Torcida, which is the name given to the supporters of Hajduk FC. This case study represents a continuity of their research interest into football supporters and the Against Modern Football (AMF) movement.

The case study on the Supporters’ of Varteks FC is the first sociological research on Varteks FC. It is a football club founded and owned by its supporters. Old Varteks FC played an important role in Croatian football until its management and local political/football elites changed its name to Varaždin and brought the club to bankruptcy, participating in numerous affairs, legal cases and convictions due to match fixing. In response to this, the passionate supporters of old Varteks -the White Stones, together with other supporters- founded a new football club using it’s old name, Varteks, in 2011. Since then, this new club has been refereed to as ‘Supporters’ Varteks’. This ethnographic case study was carried out for a period of 16 months, attending gatherings, events and matches and interviewing key members of Supporters’ Varteks.

Varteks is a football club founded and owned by its supporters. The supporters are stigmatised and frequently labelled in the media as hooligans and are in conflict with the local political and local/national football establishment. They also experience stigmatisation due to their age, as many of the supporters represent a young cohort; many of them aged 18-20. However, their marginalisation did not extend to public social spaces such as  parks and pubs. Here they emerged as a social actor, building their football club on a democratic basis (one member one vote) and fighting for their values despite the hostile socio-political environment. Those values align with the Against Modern Football Movement (AMF), which, in the Croatian context, is not only against rigid commercialisation and Police repression, but is also a movement against corruption in football and politics.

One of the key findings of this ethnographic study on ‘Supporters’ Varteks’ research is certainly an awareness of the inaccuracy of the stereotype that regularly appears in both the Croatian mainstream media and the academic community concerning supporters – a stereotype of violence and extreme right-wing political orientation. Our respondents represent social actors that includes both representatives of the ultras subculture, and other supporters who share the sensibilities of the ‘Against Modern Football’ movement and who oppose corruption and crime in the Croatian Football Federation.

From conflict to innovation 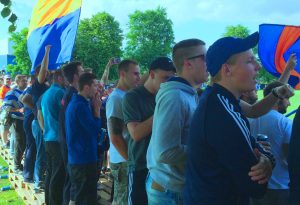 The’ Supporter’s Varteks’ respondents represent the progression from conflict to innovation, the key emergent theme for the overall PROMISE project. They were in conflict with the political and local/national football establishment during the period in which they rejected the prevalent corruptive football club culture and changed the name of their supporter’s football club. They emerged as social innovators by founding the new football club, establishing democratic principles of management, and thus strengthening the Against Modern Football movement.  Nowadays, it appears that they are in conflict again, but this time, they enjoy a new type of legitimacy they have gained through their innovative actions, and within the formal structure of the Croatian Football Federation.

For the full reports of all 22 PROMISE ethnographic case studies please see here.