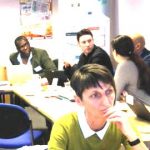 At the end of the first year of the PROMISE project partners have forged impressive links with national and local stakeholders working with young people. A National Policy and Practice Network (NPPN) has been set up in each partner country to ensure an exchange of ideas and mutual support for the duration of the PROMISE project and beyond. Most partners have already successfully held their first meeting with practitioners and policy makers in their respective countries, with the rest scheduled to have them in due course.

Parallel to the NPPN’s the European Policy Network (EPN) has also been set up and its first meeting will take place on 4 July in Brussels at the European Youth Forum organised by our partners Yes Forum. Watch this space for updates on this.

Below are details of the NPPN meetings held since January 2017:

The UK NPPN members consist of a range of youth experts from across several national and local organisations with many years of experience working with, and for, young people. See our previous newsfeed reflecting on the first meeting.

The CJD-Nord NPPN is currently being organized and includes organisations that have been contacted for the case studies such as the Muslim Women’s Organisation e.V. and the Muslim Girls e.V.

The NPPN meeting was held successfully with 16 national and local policy makers. Partnerships were forged and the group demonstrated a great interest in future knowledge exchange activities.

The establishment of the Portuguese NPPN started in September 2016 with an extensive identification of relevant institutions and individuals working for, or representing, youth in Portugal. 16 institutions, from the public, academic and youth NGO sectors, joined the Portuguese team to discuss youth engagement and knowledge exchange.

The Slovakian NPPN includes 12 stakeholders from various institutions, and practitioners and experts working with young people as well as social scientists with a research focus on youth. The combination of expertise in research, policy and practice promises an integrated approach to youth issues both within and outside the project.

The Finnish NPPN includes representatives from associations and cities involved in the case studies, as well as representatives from Finnish youth associations and youth researcher. Through its multi-professionality and high level of expertise the NPPN offers excellent possibilities for continuous dialogue with relevant policy and practice stakeholders, and ensures dissemination beyond the academic community.

NPPN yet to be held

Centre for Youth Studies at the Higher School of Economics (HSE), Russia

The Russian NPPN has been set up and includes 10 experts – leaders of non-governmental organizations, youth movements, activists and scholars. The first meeting will be taking place in November.