The second PROMISE project meeting in Rome, Italy brings together the 12 PROMISE partners from across Europe 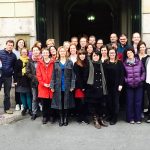 The second PROMISE meeting in Rome was hosted by our Italian partner, IPRS, from the 22 to the 24 February 2017. The meeting was very productive with presentations, discussions on fieldwork, analysis, national and European practice networks, dissemination, as well as work package meetings. There has been much progress since the first kick-off project meeting that took place in Manchester, back in May 2016. There were new staff members joining the PROMISE project, who were warmly welcomed to the group. The partners had all produced a national context report (coming soon to this website!) that provides an overview of developments in the last 15 years, focusing on national and local experiences of young people, with reference to key historical changes that have shaped the current political, social and cultural climate.

The quantitative team had checked out existing cross-national secondary data and how this could feed into our new PROMISE survey.  Ethics approval had been obtained by almost all of the partners conducting fieldwork, and lots more progress was reported:

With 20 ethnographic case studies taking place, generating at least 500 individual interviews in the coming months, there was much to be discussed. One key focus was on the consistency of the data collection and the preparations needed for the cross-European cluster analysis.  The innovative approach to our data analysis, pioneered by Prof. Hilary Pilkington from the University of Manchester, allows the partners collate and analyse themes across the huge dataset that will be gathered during the course of the PROMISE project.

All the partners were also looking forward to beginning their fieldwork and putting the photo-elicitation methods into practice!

As part of the mixed-methods approach being undertaken by the PROMISE project, our quantitative methods team will utilize the data available from cross-national surveys to evaluate attitudes and behaviours among Europe’s young people. In addition, they will also design a new nationally representative survey to be administered in each of the 10 PROMISE partner countries. The new PROMISE survey will develop items to measure youth involvement and social engagement on a European scale. Some of these items will be informed by the observations of the ethnographic case studies, which will also strengthen the link between qualitative and quantitative approaches being used in the PROMISE project.

Ideas were exchanged about actively engaging young people in the research project. Collaborations with policy makers and practitioners, at the European, national and local level, are also a key aspect of the PROMISE project, with collaboration and knowledge exchange being fundamental elements of our research. The group were keen to hear about the University of Manchester’s recent National Policy and Practice Network (NPPN) meeting, with other partner’s own NPPN’s all scheduled to take place over the coming weeks and months. Lots of ideas were exchanged about how to engage with organisations and young people, particularly around making the most of these valuable contributions and the most effective ways of working together. The Dissemination and Impact Strategy group updated the partners on the development of the PROMISE project webpages and social media channels on Instagram and Twitter, as well as outlining future plans for disseminating all the great work undertaken by the PROMISE team.

The meeting attendees were delighted to end on a high point, when one of our International Advisory Group members, Prof. Sandra Wallman, concluded the meeting by commenting how hugely impressed she was with all the work that had been undertaken so far.

Our new ‘Research Impact’ section will be launched soon, so please check back to see all the latest PROMISE updates!